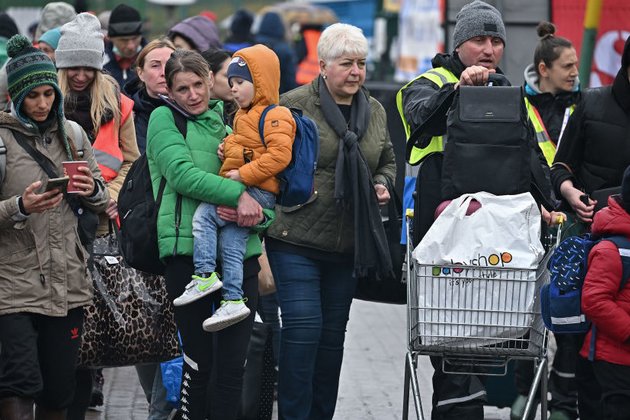 Brussels has offered only ?144.6 million to help Warsaw shoulder the costs of hosting 3 million Ukrainians, and the money hasn?t arrived

Poland reportedly hasn't received any of the money promised from the EU to help cope with the costs of hosting more than 3 million Ukrainian refugees, and even the funds that have been pledged are paltry relative to the massive influx of people fleeing the former Soviet republic.

None of the €144.6 million that the European Commission offered to help Warsaw get through the Russia-Ukraine crisis has been transferred, Polish Deputy Interior Minister Pawel Szefernaker told the Polish Press Agency in an article posted on Saturday. Given that Poland will incur billions of euros in costs as by far the top destination for Ukrainian refugees, the EU support that has been promised so far is far from enough, he said.

More than 3.5 million Ukrainians fleeing the fighting in their country have crossed into neighboring Poland since Russia began its military offensive against Kiev three months ago, according to a United Nations estimate. Some of those refugees have continued on to other countries.

Poland has no border controls with other nations in the so-called Schengen Area, and EU countries are allowing Ukrainians to stay for as long as three years. Warsaw estimates that over 3 million Ukrainians remain in Poland, and about half of those will consider setting down roots for an extended stay in the country.

The EU plans to tap unused funding to Poland from past budgets and from a Covid-19 recovery program to pay for the refugee assistance, the Polish Press Agency said. European Commission spokeswoman Anittaa Hipper told the media outlet that subsidy agreements with Poland must first be resolved. Even if and when that money arrives, it won't meet Warsaw's financial need.

"The measures referred to by the European Commission are not additional measures," said Szefernaker, the deputy interior minister. "These are resources shifted from various other funds that were already in the budget of the European Union." He added that shifting such funding will force Poland to abandon other projects and will be far from sufficient to pay for the refugee influx.

Poland's government has given Ukrainian refugees free health care, education and other services. About 80% are reportedly housed in the private homes of Polish citizens.

"From the beginning, we said that the help we provide goes into the billions of euros, not millions," Szefernaker said. "EU aid to countries that help refugees should also amount to billions of euros."